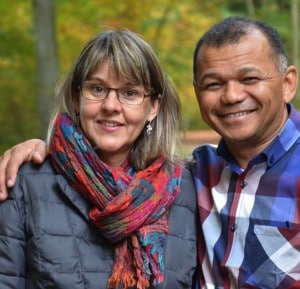 When Christina and Marciano Teixeira first went to Ethiopia in 1997 to help poor children, Marciano worked in a home for boys and Christina was busy with their own two boys at home.

Marciano often did not agree with the concept of the childrens’ home and Christina was confronted daily with the poverty of the street children who came begging at her window or whom she met at the garbage dump where they were searching for food. They started looking after these children by giving them food, finding new clothes for them, washing them, cutting their hair etc.

The Texeiras always planned that the project would be led by an Ethiopian one day, and wanted it to be an Ethiopian project rather than some sort of Swiss centre in the middle if Ethiopia. Of course there are signs of western influence, like raising the standard of hygiene etc. but from the beginning they worked together with locals like Getachew Tesfay (one of the first members of staff who soon became Marciano’s right-hand man) and the local social security office. In 2003 Getachew became manager of ORE Ethiopia. He and his staff continue to run the project, which is now in its sixteenth year. Marciano Texeira continues to support the work and visits the project regularly.

In 2005, the Teixeiras family moved to Brazil, Marciano’s home country. Three years later they founded “Operation Rescue Brazil” and opened a new project in Patos in August 2008, helping now 300 children. Christina and Marciano then moved back to Switzerland in 2011 and Nilma, a Brazilian lady, became manager of the project in Patos. She is being supported by her employees and some volunteers.